Cheryl Chanderpal was driving through Kruger National Park in South Africa one afternoon on a self-guided safari, and was excited to see who she might find on her travels that day.

“I am a South African, and one of my favorite pastimes is a self-driven safari,” Chanderpal told The Dodo. “We had just passed a hyena and stumbled onto a quiet road — those are the best because you never really know what might be lurking in the bushes nearby.”

Chanderpal was excited to see who they would encounter next when suddenly, in the distance, she saw a strange little animal dart across the road. Instinctively, she grabbed her camera to take some photos — and couldn’t stop laughing when she saw the results. 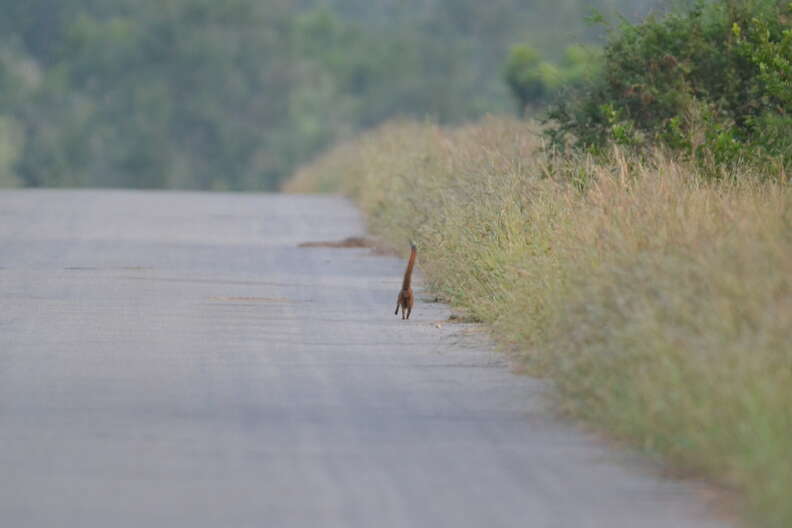 In the photo, the strange animal she had captured didn’t look like anything she’d ever seen before. She decided to post the photo and get everyone else’s opinion, and the results were pretty perfect.

“I posted that photo for laughs and to see who could figure out what animal it was,” Chanderpal said. “Among some of the guesses were mini brontosaurus, tiny giraffe, tiny dinosaur and so on. It was hilarious!”

Once the car got a little closer, Chanderpal was able to figure out exactly what kind of animal the little thing actually was.

“In reality, that was what is known as a common dwarf mongoose,” Chanderpal said. “They are certainly adorable, fast-moving and quite a treat to photograph. He ended up on a tree and stayed there to make sure the coast was clear for his family to cross the road. Animals are the best.”

Chanderpal was happy to see the little guy up close and was able to capture some much better photos of him. Still, she’ll always love that first one of the tiny giraffe. Photographic gold.